You are here: Home / SpectraComm / HOW YOUR BUSINESS IS LIKE A ROWING CREW 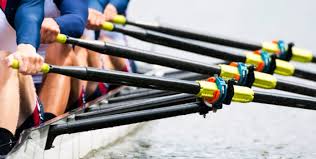 Imagine your business as a rowing crew with 10 people rowing and one directing the crew. On a rowing team, the director is called the coxswain. In a business setting, the director (coxswain) could be the President, CEO, Managing Partner, etc. Though the coxswain does not row, this position is just as essential as that of each rower. The coxswain’s primary job is to keep the boat moving forward in a straight line. In addition to steering the boat, the coxswain helps the crew keep the cadence by calling out instructions and the stroke rate. If the boat can’t stay in its lane, it gets disqualified so keeping it on course is critical to success. Coxswains steer the boat by making minor corrections in the direction of the rudder and making sure all rowers are equally engaged. They manage its speed by motivating the team. The coxswain is responsible for the safety of all the rowers in the boat and of the equipment. Sounds a lot like the duties of company leaders, doesn’t it?

Coxswains control the team by using a “cox-box” which provides the current stroke rate much like the metrics organizations use to measure the effectiveness of their people. If the stroke rate is off-pace, they will instruct the “stroke” to control the rate and bring it back to race pace. The stroke is the most important position in the boat because the stroke rower sets the stroke rate and rhythm for the rest of the crew to follow.

Now imagine that the rower sitting next to the stroke is disengaged and not rowing at all. Further, imagine that five of the ten rowers are barely rowing and another one is purposefully rowing backward. Imagine the challenges the three effective rowers would have trying to row around the seven who were actively disengaged or under-performing. Imagine the stress levels of the coxswain as he tried one thing after another to get the team working together without success.

When all of the rowers are exhausted (or in this case the three that are rowing), they depend on the coxswain for motivation and the determination to win; to add that extra bit of strength they need to keep going. A coxswain must be more than just a good communicator; he must stay calm during the whole race and sound confident. But, if most of the team was under-performing, how calm or confident do you suppose he would remain?

This scenario is what is happening in companies everywhere because overall 50% of employees are disengaged (not rowing very hard), 20% are actively disengaged (purposefully rowing backward or not at all) and only 30% are engaged (rowing well). Is it any wonder stress levels are so high for employees as well as leadership?

In the rowing example, rowers help the coxswain by being attentive and keeping their focus on what’s happening in the boat. They can’t see where the boat is headed and need to trust their leader to tell them where the other boats are positioned. On the rare occasion when the coxswain finds his boat in a dangerous position, he needs to know that the crew trusts him and will respond to his calls immediately.

Even with the proper intention, when the team falters and the leader loses his cool, resistance comes up and the trust and confidence of the team drops. As this occurs, the rhythm of the team goes off and both speed and precision are compromised. This can be readily seen in a rowing team because a race moves quickly and if synchronization is not immediately recovered, the race is lost.

In organizations, even if leaders intend to lead effectively, as most do, but lose their cool because their team is disengaged and not working together, stress is what rules the day both for the leader and the team. And where stress rules, the thinking brain disengages, and the reactionary brain takes over. So, in time, the effectiveness of the leader and of those they are trying to lead becomes seriously compromised. Although the consequences are not as immediately apparent in a company as they are in a boat race, they are just as damaging in the long run.

This rowing metaphor is another way to bring awareness to the reality that we are on the threshold of a major shift. One that is inescapable and filled with both risk and opportunity. Awareness of both is the key to influencing change we can all embrace. Influential leaders have been the impetus behind every great movement and every significant transformation throughout history and will be through the challenges organizations face today. But to be influential, it’s essential to know what those you seek to lead want and expect.

Within the pages of the recently released book Power Shift: The New Rules of Engagement, you will discover what it takes to deal an irresistible force (the values and mindset of a large generation) and lead change. You will see how the power of influence can move people of every generation to heights of effectiveness most never imagined they could reach.

Power Shift provides leaders with tools and strategies they can use right now to successfully ride that great wave of change, keep their people engaged and productive, and build a high-performance organization that is both purposeful and profitable now and into the future.

Or To Buy The Power Shift Book, Go To:   BUY POWER SHIFT

If we are a product of our environment, I well recognize that my early life of confusion and END_OF_DOCUMENT_TOKEN_TO_BE_REPLACED